Vermouth is a mainstay of classical cocktails.  The various red, white, sweet, and dry fortified wines show up all over the place in recipes involving whiskey, gin, vodka, and even rum.

Vermouth is also the theme for this month’s Mixology Monday, graciously hosted by the the pseudonymous “Vidiot” at the Cocktailians blog.  As Vidiot notes, vermouth isn’t often sought-after by most people in a bar, pointing out that vermouth “enjoys a somewhat better reputation among the cocktailian cognoscenti than it does among the greater public, but vermouth is similarly (and unfairly) maligned by many.“

[Y]our challenge, should you choose to accept it, is to present a delectable vermouth cocktail for us all to drool over. Sweet/Italian or dry/French vermouth are fair game of course, as are quinquina, aperitif wines like Pineau des Charentes, or for that matter any fortified, aromatized wine such as Lillet (red or white), or Dubonnet (ditto.)

Being fairly lazy, I considered just submitting the El Presidente again, but being someone that loves more than one cocktail using rum and vermouth, I decided instead to present a different drink altogether.

The Palmetto is a drink that is based on the same premise as the Martinez, Martini, and Manhattan cocktails: equal parts spirit and vermouth with a little bitters. The only thing that seems like it could be wrong with this drink is the fact that its name doesn’t begin with an “m” like all of the others that came before it. 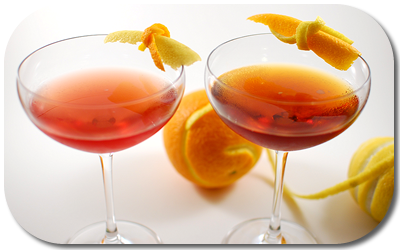 There are a few variants of the drink, and the proper one for your palate may depend on your preference for light spirits and dry vermouth or brown spirits with sweet vermouth.  The two variants don’t seem to have different names, but for the sake of clarity, I’ll affix some descriptors to them.

Stir with ice, strain into a chilled cocktail glass.  Garnish with a lemon twist.

The Dry version of the Palmetto is, in my humble opinion, an abomination.  While I haven’t tried every single combination of white rum and dry vermouth, the ones I have tried seem to certify this drink as an abject failure – and I say this as a huge fan of the Martini.

Stir with ice, strain into a chilled cocktail glass.  Garnish with a lemon or orange twist.

I don’t much like calling it a “Sweet Palmetto” – at my house this is just a Palmetto, and the Savoy Cocktail Book would seem to agree with me.  The switch from a rum martini to a rum manhattan transitions this drink from awful to awfully good, and has thusly made the Palmetto a staple for me at home.  I have yet to find an aged rum that won’t work in this drink, though I’m particularly partial to using El Dorado 15 Year Old or Mount Gay Extra Old.  As for the vermouth, well use what you like, but if you want this drink to really sing, grab yourself a bottle of Carpano Antica Formula.

Question for the day: