For a second there I was worried that Mixology Monday might miss the entire month of September.  I’m sure you were worried too.  And if you weren’t, just pretend that you were to make me feel better.

The fine folks at the eGullet forums are hosting this month’s virtual cocktail party.  I often find myself filled with a combination of anticipation and anxiety when I go to see what the next MxMo is going to be.  I generally want to ensure that I can find a way to work rum into the drink recipe.  Of course, rum’s versatility generally means that that isn’t difficult.

Our theme for September is “Dizzy Dairy:”

Any drink using a dairy product is fair game: milk, cream, eggs, butter, cheese, yogurt, curds, you name it. Given the importance of dairy products in drinks dating back centuries, there are lots of opportunities for digging through vintage receipts for a taste of the past, and as always innovation is highly encouraged.

So off I went, plummeting through recipes in cocktail books both new

and old.  I scoured the informational cornucopia that is the Internet.  I, well I looked at a lot of recipes, and eventually settled on the Trader Vic’s Rum Fizz (as found on CocktailDB.com).

Combine all ingredients other than the Cream Soda in a shaker and shake with ice.  Strain over ice in a highball glass and top with cream soda.  Garnish with orange zest.

Trader Vic, of course, gave us the One True Mai Tai (I don’t care what Don The Beachcomber said).  I figured I couldn’t very likely go wrong with one of his recipes.  Before making it, I delved deeper into the Internet’s tome of knowledge and found Darcy’s notes on the same drink.  Darcy seemed to think that the drink was not without merit, but seemed, “a little lumpy, ie. the flavours are all present, don’t seem to combine as well as the Ramos Gin Fizz.”

The different flavors in the drink just don’t blend together.  There was abrupt lemon flavor, followed by a bit of sweet vanilla and then a slightly off-putting dryness that just didn’t seem right in a fizz.

I spent the better part of an evening tinkering with the recipe.  Ingredients were added, removed, re-added, re-removed, upped, downed – anything I could think of.    Glasses were lined up next to each other with foam at various levels, covered with small shavings of orange zest so that I could ensure that I was moving towards something better. 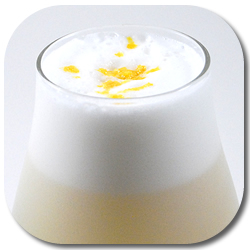 Combine all ingredients other than the cream soda in a shaker and dry shake for about a minute.  Add ice to the tin and shake for as close to a minute as you can.  Strain into a tall, thin glass and top with cream soda.  Garnish with fresh orange zest.

First of all, the ice and the highball glass had to go.  After that it was a matter of finding the right sweeteners to bring the drink together.  The orange from the zest was wonderful, so curacao was added to enhance that on the palate a bit.  Still, the drink was too abrupt, so – this being a drink inspired by Trader Vic – why not use orgeat to smooth out the edges?  The final product was much more balanced and smooth.  It’s almost silky on the tongue and the orange, vanilla, and almond flavors all pull together quite nicely.

I don’t want to say that Vic was wrong.  The man created the Mai Tai – one of the single greatest liquid creations of all time.  But in this case he was a tad off.  Using his initial drink as a starting point though, I think there are a number of great directions the recipe can be taken.

Have you ever had the Trader Vic’s Rum Fizz?  Did you like it?  How would you improve it?