I seem to be on a bit of a Venezuelan kick lately.  That might sound weird on a rum site, but the truth of the matter is that the nation of Venezuela seems to be producing a heck of a lot of good rum, and Santa Teresa is no exception.

In 1796 the Santa Teresa Hacienda was established by the Count of Tovar y Blanco after being given the land by the king of Spain.  100 years later, new owner Gustavo Vollmer Ribas began producing rum on the hacienda.  The Santa Teresa 1796 was created in 1996 to commemorate the 200th anniversary of the hacienda’s creation.

Santa Teresa 1796 is a molasses-based rum, with the hacienda bringing molasses in from nearby sugar mills.  The rum is one of the growing number of Latin American rums produced via the Solera method.

Four levels of oak casks are employed to control the solera aging of the rum.  The first levels are referred to as the Criadera, which means nursery in Spanish.  As time passes, rum from the Criadera barrels is eventually moved to the Solera level of barrels, which is the fourth and final level with the oldest rums.  The Criadera is then topped off with newly blended rum (referred to as Madre or Mother rum) in the first level, while rum from the first level is used to fill the second, and so on.

One of the interesting things about Santa Teresa 1796 is that the rum entering the Criadera is not unaged rum.  Madre is actually a blend of pot distilled and column distilled rums which have been aged from 4 to 35 years before becoming part of the solera process.

The classically styled bottle of Santa Teresa 1796 has a lovely – and most importantly easy-to-remove – wax seal covering the cork that you almost hate to break.  Sacrifices must be made though, and once the spirit is sitting in your glass, you’ll forget all about that broken wax seal.

In the glass the rum is a nice, warm honey color.  Golden and rich-looking, a mandatory swirl in the glass creates a thick rim in the bowl before thin, strong legs form and slowly make their way down the side of the glass.

Honey and caramel greet your nostrils, seductively leading you next to notes of green apple and banana.  There’s a hint of cashews and leather in the bouquet, as well as a very light vanilla note at the top.

The rum is still in the glass and already feels warm and inviting, silky and seductive.

A tip of the glass and suddenly your tongue is immersed in rich toffee and caramel.  Cocoa and ripe banana are the end of the beginning before the mid-palate introduces notes of cherries and molasses and a sherry-like quality that was a very welcome surprise.  The finish of the rum is full of oak and nuts, with a slight aftertaste of green apples that is quite pleasant.

All in all, it’s a very smooth rum, and a very enjoyable sipper.  One snifter in the evening could easily turn into 3 or 4 before you realize what you’ve done.  1796 is a deep, rich experience not unlike that of Ron Zacapa 23 with more pronounced sherry notes.

The rich sweetness of Santa Teresa 1796 can create something of a mixing dilemma – or opportunity if you enjoy tweaking classics ever-so-slightly.  The rum’s heavy sugar flavors mean that any cocktail will require less sugar or more citrus and bitters.

Probably the most natural drink with 1796 is a simple Rum Old Fashioned with Whiskey Barrel Bitters, or a Daiquiri with a mere dash of simple syrup and perhaps even a single dash of Peychaud’s bitters.

After spending the better part of an evening trying it in several drinks (remember I do all of this for you, really…) I ended up really enjoying an El Presidente. 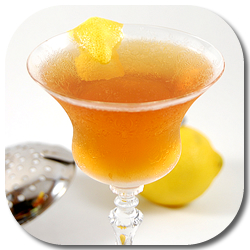 Santa Teresa 1796 is a delicious representative of Venezuela.  The rich, flavorful rum should be a welcome guest in any drinker’s glass.  At $40 – $50 depending on where you find it, it’s not quite the bargain that Ron Diplomatico Reserva Exclusiva is, but is nonetheless well-deserving of a spot on any rum lover’s shelf.  If I have any reservations about this rum, it’s that it may be a bit rich for every night enjoyment, and that same richness limits it somewhat when it comes to cocktails.  Still, if I were looking for a great rum to pour at a celebration or any other special occasion, it would be an error to ignore the Santa Teresa 1796.

Dood’s Rating: 4 Bottles of Rum Out of 5

Other Reviews of Santa Teresa 1796: