A few weeks ago I left the cozy confines of the Anaheim Resort to travel to the Dominican Republic to visit with Brugal.  While there I toured their distillery, their blending and aging warehouses, and spent some time talking with representatives of the brand, including two of their Maestros Roneros.

Brugal was founded by Andrés Brugal Montaner in 1888 in the town of Puerto Plata on the northern coast of the Dominican Republic.  Brugal originally emigrated from Spain to Cuba, where he spent time learning the craft of making rum before relocating to the Dominican Republic.  Since that time, Brugal has grown to become the third largest producer of rum in the world, ranking behind only the Puerto Rican brands, Bacardi and Captain Morgan.

You wouldn’t know that by looking at the shelves in the US.  While Brugal is the best selling rum in the Dominican Republic and very well known in the Caribbean and Europe, for whatever reason it hasn’t quite cracked into the American consciousness yet.  But Brugal is working to change that, and this year introduced the American market to its Extra Viejo product.

The Brugal rums are a line of rums made in what is often referred to as the Puerto Rican or Latin American style.  They are double-distilled and very light-bodied.  They are characterized a clean, smooth flavors and are usually enjoyed in the Dominican Republic with Coke or 7-Up.  Brugal’s rums include a wonderful white rum, as well as a gold, the Viejo, and the newly available (in the US) Extra Viejo.  Of course, if you’re in the Dominican Republic you can also probably find yourself a bottle of the Siglo de Oro. 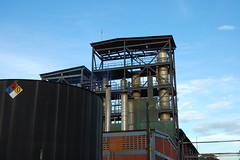 Brugal’s distillery sits on the southern side of the island, in San Pedro de Macoris.  There they ferment molasses made from locally grown sugar cane and then distill the resulting molasses wine into rum.  Once the rum is distilled, tanker trucks are filled with the clean distillate and it is sent to the north side of the island, to Puerto Plata, where the aging, blending, and bottling operations are housed.

Tours are available for the public to see how Brugal’s bottling operation works, along with glimpses of their aging warehouses.  I was lucky enough to be part of a special tour that took us through the different warehouses to see the barrels (used Jack Daniels casks) full of rum of various ages, all color-coded to allow the employees to easily identify how old any given barrel’s contents are.

Barrels are color-coded by age 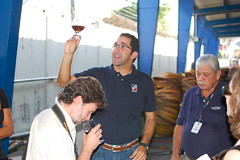 According to Gustavo Ortega Z. Brugal, one of the company’s Maestros Roneros, the company and family are working to find new approaches that can be blended with the long-standing traditions of making rum in the Dominican Republic without sacrificing quality:

Using our family’s five generations of experience, we have always strive[n] to find ways of refining the taste of our rum.  As such, we are currently testing different types of wood in our casks to better understand how this may add different characteristics of colour, aroma and taste to our rums, and how this wood reacts to our Caribbean climate. 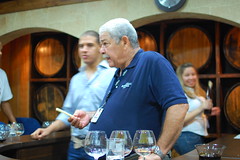 Following our time in the hot and humid warehouses (the perfect climate for aging rum but not necessarily for keeping a person’s shirt very clean), we were led back into air conditioned confines and treated to a tasting of Brugal’s different rums.  The highlight of the tasting was easily the family’s private blend, Ron Brugal Papá Andrés, named for the company’s founder.  A blend of rums from 8 to 15 years old – the same blend used for Siglo de oro – is recasked after blending and then left in the barrel “until the family wants to bottle more,” according to Gustavo.

Attempts to convince the family to let me take some home for research purposes were thwarted, meaning my only hope for a decent supply is to try and marry into the family.

Next post: ‘Twas The Punch Before Christmas: A Contest